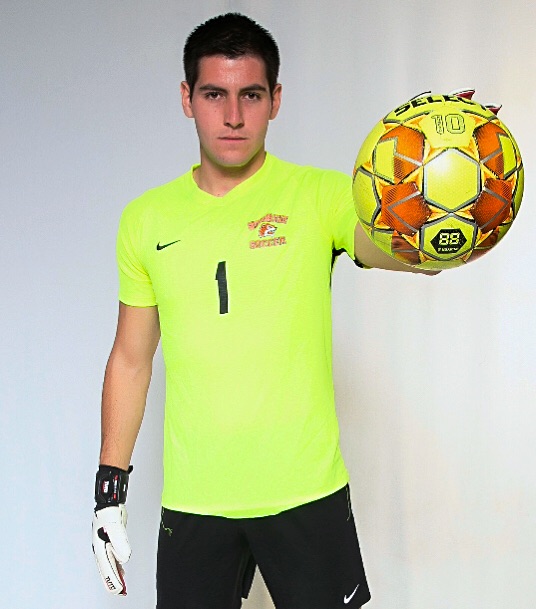 Now he is the Phoenix’s next “Athlete from Abroad.”

When asked where he is from, Ramirez’s answer was more complicated than anticipated. He was born in Bogota, Colombia and lived there for about a year. He then spent three years in Ecuador. Finally, he moved with his family to Lima, Peru, where he spent most of his life. Ramirez’s short answer would be that he is from Peru.

Although the constant moves were a little stressful, Ramirez owes his soccer career — and his passion for goalkeeping — to the short time he spent in Ecuador. During a summer in Ecuador, his parents decided to enroll him in a soccer academy. During the very last day of camp, the goalkeeper didn’t show. The soccer instructors threw Ramirez in goal, and he excelled.

It was this small moment in Ecuador that Ramirez credits for his goalkeeping career. While standing in goal as a child at summer camp, he discovered a feeling that he hadn’t experienced before. This sensation, as described by Ramirez, is “the feeling that you can save your team from really tough moments when they need you.” He takes seriously his role as the last line of defense.

His passion for the sport was further encouraged by the passion of his family. In fact, his father is an ex-professional soccer player turned coach.

After moving from Ecuador to Peru, Ramirez competed on two teams that helped him to grow as a player. He competed for the under-18 Club Universitario de Deportes and for Sporting Cristal, where he competed on both the under-18 and reserves teams.

Although he was successful, he struggled to obtain any professional contracts. For that reason, he retargeted his goals on earning a college degree. He completed his first year at la Universidad Peruana de Ciencias Aplicadas in Lima, Peru. He has also been a member of the men’s soccer teams for Campbellsville University in Kentucky and Salem University in Virginia during his sophomore and junior years respectively.

Ramirez transferred to Governors State for his senior year because he was “striving for the best.” Underwhelmed by the other American programs and growing tired of rural city life, GSU’s program seemed like the perfect fit for his needs. Not to mention, the coaches enticed him with a scholarship opportunity and a promise of connections to professional leagues.

So far, Ramirez says he has been satisfied with his experience in the Chicagoland. Comparing Chicago with Lima, Ramirez said that the two cities are “completely different realities.” “The standard of living here is much higher,” he said. “There are more opportunities to work, study, and make relationships in general.”

When asked about the team’s successes this season, he said that the team has been motivated by a desire to “[stay] on top of the league and [go] to nationals.” Ramirez also referred to his Defensive Player of the Week Award as another motivator. “[The award] motivates me in some way because it has not only served me to prove something to myself, but also to my teammates. These kinds of awards help them to believe that there are chances.”

“We want to win nationals for sure,” Ramriez reassured. “I think we have a lot of room to improve,” he said, “but I believe we can.”

The 22-year-old senior will graduate from Governors State this spring with degrees in both business administration and entrepreneurship. The team will be forced to adjust without having Ramirez to defend the net. However, he praised sophomore Drew Seyden for the improvement he has shown this season as a goalkeeper.

Ramirez would like to earn a soccer contract here or back home once he graduates. However, he has off-the-field dreams, too. Ramirez aspires to establish some sports-related business, whether it be a goalkeeper academy or performance gym. “I would like to start [in the United States] to gain experience, and hopefully go back home and open a non-profit business related to sports.”

Passion for the game pours from every aspect of Ramirez’s life. He has dedicated hundreds of hours to improving skills, and he has seamlessly stepped into his role as a team leader. Many long for but few achieve the levels of passion and dedication that Ramirez has displayed in pursuit of a soccer-related career, and such traits will carry him far in whatever career he decides to pursue.

(Editor’s note: This story has been updated.)