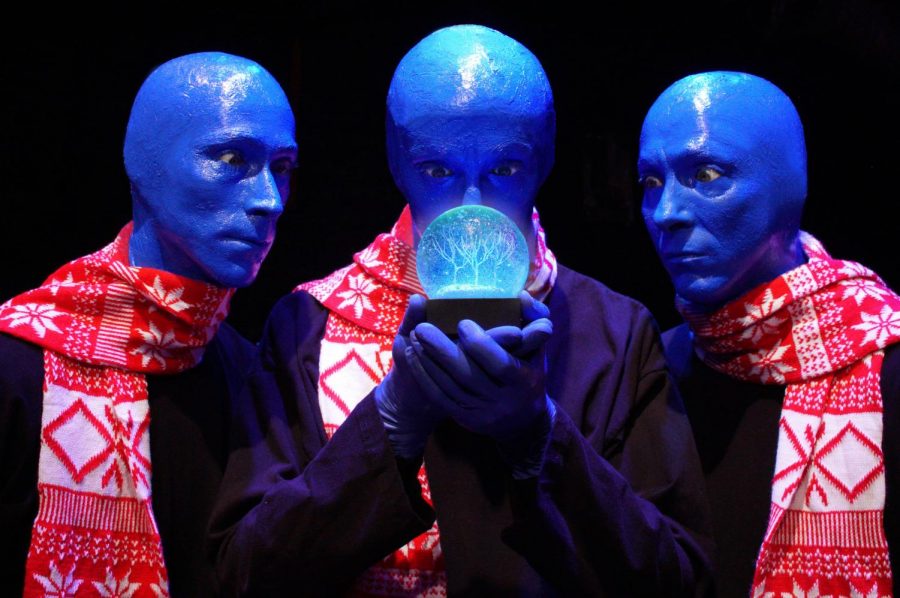 Blue Man Group members use a snow globe during their show.

After a 15-month, COVID-required hiatus, Blue Man Group is back at its home base of Briar Street Theater, crafting its signature vibrant combination of sound effects, music, facial expressions, and humor.

The Group’s show engages audiences through storytelling to revive their curiosity by unleashing our “ego” of society’s norms in hopes of tapping into our imaginations.

The Phoenix News staff jumped at the chance to experience storytelling in the most innovative and entertaining of ways.  And after the show, we joined other media students from different Universities for a Q&A with Blue Man captain Tom Galassi, stage manager Brett Presson, and fellow band member/associate music director Jeff Quay for Blue Man Group’s first-ever press night.

Galassi and his teammates spoke of overcoming the challenges that come with being a solely audience interactive show in a time of COVID restrictions, what it takes to put this type of show together, how they are able to connect with their audience without the need for a dialogue, and even answered the question of “why blue?”

Galassi emphasizes the importance of connecting with the audience when on stage. “We are trying abstractly, in a new and unique language, to connect all of us in the audience,” he said. “It’s something that I think we hone for years and years, always chasing connection within us all.”

Presson said COVID restrictions forced the group to separate for 15 months. “All parts of the process were challenging,” he said. “We were all not doing this for around 15 months at least and then slowly coming back and trying to judge audience’s appetite, public appetite for coming out and trying to figure out policies we need to have in place for safety.”

But even with these restrictions the show gave the audience members 90 unsolicited minutes of escape through the sounds of banging drums, unique instruments, paint splattering, and on-stage screens which included numerous jabs at pop culture.

Getting back into the rhythm of things was another challenge faced by the group. Galassi explained the hours of work that were put in  preparing for the show and even the need to get “back into shape,” including learning to perform with a mask.

“At first, it took a while to get use to that, because what we’re doing is so physical,” Galassi said. Quay agreed, saying: “Yeah, I have a real difficult time with the mask, and being up there drumming, I get pretty winded during the show, and in fact after having 16 months off I get really winded now.”

While COVID has forced numerous changes, make no mistake that the three blue men of few words – none, actually – still manage to engage their audiences. The Blue Man Group show’s sound elements, props, and imagery inspire the “child,” wonder and curiosity in us all.

And that curiosity often leads to the question of “why blue?” which Tom Galassi took the time to answer stating,

“There’s a lot of different stories,” Galassi acknowledged, “but basically there was a guy who helped create one of these characters who had a dream when he was a kid that he had blue friends.”

The  Q&A ended with some words of advice for those who plan on entering the media field.

Presson said: “The biggest thing that I’ve learned when I was coming up is ask questions.” Quay reinforced that sentiment, saying: “That’s a huge thing, don’t be afraid to be curious, nothing’s more boring to me than somebody who isn’t curious, to me that’s what life is made of. I think there’s an overemphasis placed on society knowing stuff.”

Galassi spoke of how as a Blue Man he takes risks when he’s on stage not knowing the outcome, stating, “After every show the three of us talk and I’m like Hey I got a suggestion for you did you know you’re doing this? Like I just got three suggestions, and anytime anyone has a suggestion for me, I just try it. There’s no reason not to, it doesn’t mean I’m bad. Like I want to learn, I want to experience what somebody else has experienced.”