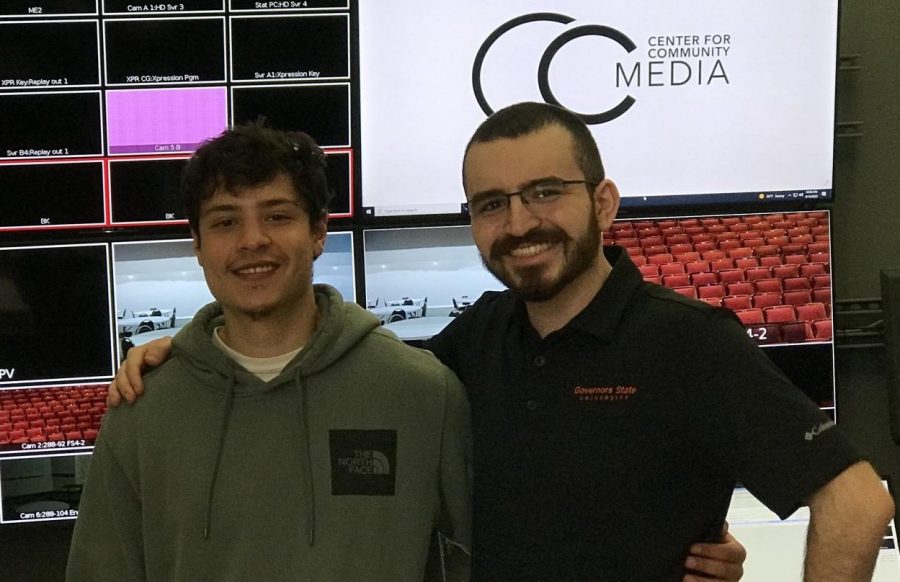 Dante Corona (left) and Claude T. Martinez in the CCM Studio at GSU.

Dr. Deborah James, director of GSU’s Center for Community Media, has confirmed that Claude T. Martinez and Dante Corona are leading the student team that produced the school’s new half-hour program which premiers May 3 at 7:30 p.m. on public access TV.

Martinez is the program’s producer/editor; he is wrapping up his senior year. Corona is the graphic director/digital content producer; he is a junior currently enrolled in GSU’s Media Studies Program.

The program was awarded a 30-minute monthly time slot on Homewood Comcast Channel 19, which covers much of Chicago’s Southwest Suburbs. It will provide GSU students with a platform for creating and sharing content, giving students first-hand experience in pre-production work.

“We have produced our first episode with work highlighting GSU’s 2021 year,” Martinez said, “including features of President Green’s first year, the alumni (of distinction) reception, and showcasing ‘A Visionary Erased’ by Lauretta Vinciarelli.

“In this first episode, we were under intense pressure. In less than a week, we had to create a 30-minute show. It was extremely stressful, but it proved to me, the CCM production team, and our viewers that anything is possible.”

“I think it is extremely important that students have an opportunity to display their work to the Southland,” Martinez said. “This is because exposure like this has never been available at other institutions.”

Corona said, “It’s honestly a great opportunity; being a part of CCM and helping create graphics for the first episode was awesome,” Corona said. “It was exciting to put these graphics together and showcase (them). I look forward to incorporating more movement into the graphics and designing a completely original theme for future shows.”

The content for future CCM productions is being discussed.

“In the future, CCM will be entirely created by our media team,” Martinez said. “Currently, we are using pre-made videos for our show.”