GSU to host ‘Conversation on Democracy, Inclusion, and the Media’ 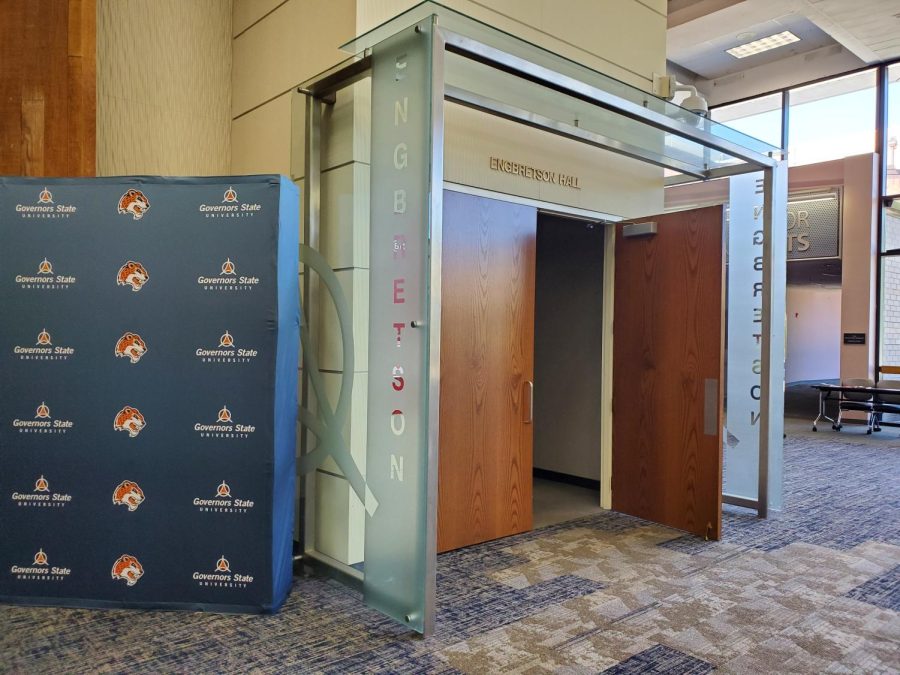 The door to Engbretson Hall.

On Sept. 22, Governors State University will host a panel on democracy, inclusion, and the media with award-winning authors and journalists. The event is designed to increase conversation around these topics and bring attention to the Center for Community Media

The conversation, presented by the CCM, will be part of a larger “launch day” for GSU’s production, teaching, and research center. The CCM, a new initiative at GSU, will serve as a broadcasting hub in the Southland and hopes to increase accessibility and coverage for the often overlooked region of Chicagoland.

“We have a lot going on in the Southland that is picked up by smaller outlets, but we feel like the Center for Community Media can fill this niche market,” said Dr. Novia Pagone. Pagone is the interim director and also a steering committee member of the CCM.

The Conversation on Democracy, Inclusion and the Media will feature two special guests:

Moustafa Bayoumi, a critically acclaimed author will participate in the event. Bayoumi is the author of “How Does It Feel To Be a Problem?: Being Young and Arab in America” (Penguin). Bayoumi’s book won an American Book Award and the Arab American Book Award for Non-Fiction. Bayoumi is also a journalist and has written articles for major news and educational content outlets.

Oswaldo Zavala, a journalist, and professor of contemporary Latin American literature and culture will also join the conversation. Zavala authored a book that is titled “Drug Cartels Do Not Exist: Narkotrafficking and Culture in the US and Mexico” (Vanderbilt, 2022). In addition to being an author, journalist, and professor, Zavala has published more than fifty academic articles on various topics.

The panel will be moderated by Governors State University professor, Dr. Jelena Radovic-Fanta. According to the GSU website, “Radovic-Fanta joined GSU’s College of Arts and Sciences in 2015 as an Assistant Professor of Anthropology and Sociology. Her expertise in cultural anthropology is a product of her diverse studies involving labor, gender, globalization, Latin America, Chile, social inequalities, and sustainability.”

Radovic-Fanta spent some time in conversation with the Phoenix about democracy, inclusion, and the media. Here is what she had to say:

Phoenix Staff Reporter: As an anthropology professor and a researcher, why do you think conversations about democracy, media, and inclusion are so important today?

Radovic-Fanta: That is a good question and one I am still trying to answer. I think they are important for many reasons. We are all in this system, this community, together. The country where we are living is defined as a democracy but then what does that system look like in practice?  As you probably know, as a lot of us know, there is inequality. There is a lot of suppression of voices and experiences. I think that having this conversation about what democracy is, what it looks like in practice, and especially thinking about how increasing the diverse cultural and social perspectives in democracy is important. [This allows] us to be able to understand what living in a democracy looks like for different people. It is also important to learn how different communities are able to solve the problems they have. It is also, I believe, one of the goals of the Center for Community Media with this launch. In having a conversation with these two award-winning scholars and journalists that are working within their own communities, we can address this notion of democracy, inclusion, and the media.

Reporter: A lot of students may look at what is going on around the country today and think we are in the middle of a culture war. When we look back at history, do you think that this is true? Or is this a normal part of what happens when we see change?

Radovic-Fanta: I think that so much of what we are, what we are living through, comes in cycles and circles. It might seem to some people today that this is a culture war, but if we look back at the seventies or if we look back at the nineteen-twenties, if you look back at all these different stages of revolution worldwide, you get these questions of culture and who we are, and diversity, and how do people who have historically had positions of privilege confront a world that is changing according to them. I think part of it is really that cultural differences, diversity, and tensions have always been there. They become manifest as what they look like in 2022 with media, transportation, and globalization for example. I think these questions about who we are as humans, and how we live as diverse peoples, have always been present. I think there is a lot that is very particular to the moment we are living in, but these questions about how to navigate social problems, inequality, and a sense of belonging have been a constant throughout human history.

Radovic-Fanta: This is something we talk a lot about in our classes. If you are familiar with the term intersectionality, I think all of us have intersecting identities. Some are more visible than others, right? Maybe racial and ethnic identities, cultural or religious identities, political identities, gender, sexuality, and maybe even class identity, [are examples]. I think that even students at a university are kind of privileged identities. So I think that we all have to, first of all, do introspection and say “What are these different identities that make me who I am? Where do I lie along this continuum of privileges that I have? What aspects of my identity have been historically underprivileged or vulnerable?” I think that if it comes from a place of honesty and curiosity, there are spaces where we can meet and have conversations. The problems come from hyperbole and stereotypes and from many different sides, but I think that if we sit down, we can have these conversations about how we are different. Where do our differences come from and where can we go from there? To have conversations about what makes us different and come together to actually listen, I think the Center for Community Media and Governors State University are places where we can listen to stories and where we amplify diverse voices and the whole gamut of the diversity perspective. There is space to have these conversations and to acknowledge that we do not know everything. There is always something more to learn. It is also important to consider what we want to be true and how our desires and beliefs about the world might not line up with what is actually true. What does science say? What do different investigations say? What are voices out there saying and how can we talk about how we relate to those things?

Those interested in attending the panel, a Conversation on Democracy, Inclusion, and the Media, as well as the launch event for the Center for Community Media, can find more information and RSVP here. The event will be held at 6;45 pm,  Sept. 23  at Engbretson Hall.